Have you ever thought about what sea turtles do when they aren’t on the beach nesting?

Sea turtles spend almost 90% of their lives in the water, but almost all of the research conducted on marine turtles is done on nesting beaches. Sea turtles are highly migratory animals and often travel hundreds to thousands of miles between the beaches where they lay their eggs and where they forage for food. In order to protect sea turtles, we need to understand their behaviors in all of the habitats they visit.

Satellite telemetry has become a very useful technology in filling the knowledge gap we have in sea turtle behavior and in helping to protect these majestic creatures.  The science behind satellite telemetry is relatively simple.  Scientists attach a transmitter to the back of the sea turtle. The transmitters vary in size, but are usually only 4 to 6 inches long and 2 to 4 inches wide. That is smaller than your smart phone!  The transmitter sends a signal to an orbiting satellite in space each time the turtle surfaces for air.

Aquarium. Kirby is a loggerhead sea turtle that arrived at the aquarium in January 29, 2019 and was successfully rehabilitated and released with a satellite tag on May 14, 2019. The map below shows Kirby’s track for 155 days. During that time, he traveled a whopping 1,614 miles for an average of 10.5 miles a day! Not all turtles travel this far though.  Xeno, another loggerhead released by the aquarium traveled 329 miles in 125 days.  These differences help scientists to discover more about sea turtle migration! 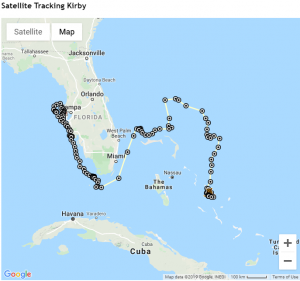 If you would like to help the Clearwater Marine Aquarium to continue their efforts to rescue and rehabilitate injured and ill animals please visit their website to make a donation! Every dollar you designate to the Animal Care Fund is used for the direct care of their animals.* 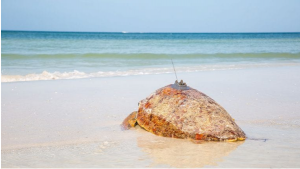 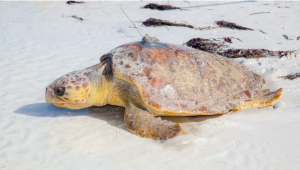 *Sea Turtle Camp is in no way affiliated with the Clearwater Marine Aquarium, but we support any effort in animal rehabilitation!